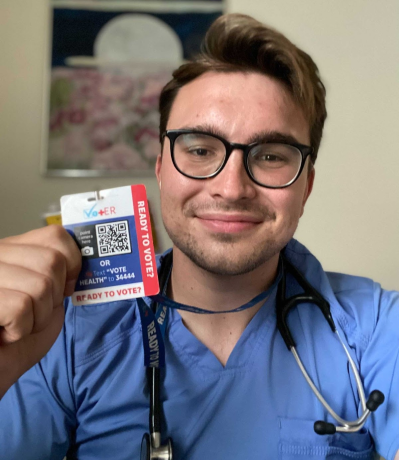 In the 2020 election, TurboVote partnered with a range of partner organizations who helped ensure that communities could register to vote in a chaotic election year.

One of these partners is Vot-ER, a 501(c)(3) nonprofit organization working to integrate civic engagement into healthcare. Vot-ER develops nonpartisan civic engagement tools and programs for every corner of the healthcare system—from private practitioners to medical schools to hospitals. Their work is driven by a community of health care professionals, organizers, clinical students, and technologists united by a common vision: healthy communities powered by inclusive democracy. After major election seasons, TurboVote provides partners like Vot-ER an update on the types of people who they helped to register to vote, as well as data on the percentage of those people who actually voted. This data provides partners an in-depth understanding of their impact and helps them to adjust their strategies for future years. TurboVote’s report on Vot-ER’s efforts show an organization that does not simply register more young voters and voters of color, but also helps turn them out to vote. 84% of Vot-ER's 2020 TurboVote users registered to vote, and of these individuals, 85% voted in the general election. Of those who voted after registering with support from Vot-ER, 39% were people of color compared to 26% of the general electorate. 56% were under 35, compared to 24% of the general electorate.

Furthermore, using Vot-ER as an intervention for voter registration turned out voters at higher rates than the general electorate. This was particularly true for voters of color and young voters. Voters expected to be low-propensity had turnout that was 20 percentage points higher than similar voters in the general electorate. All this reinforces the core of Vot-ER’s work: Leaning into health professionals as messengers can shore up the trust in our democracy, and ultimately result in voters participating in our democratic system at higher rates. It also affirms the unique approach that TurboVote takes to the voters it registers, which includes timely nonpartisan election reminders that help Americans make their plans to vote. In 2022, Vot-ER featured TurboVote in its Social Work Healthy Democracy Campaign, a competition among social work schools to support classmates and clients to register to vote. Additionally, in light of the TurboVote report, Vot-ER created early indicators to provide insight into the communities that they serve. When requesting voter registration materials, participating hospitals, clinics, and health departments include data on the types of patients they primarily serve. As of July 2022, 29% of those organizations requesting custom Vot-ER badges primarily serve patients who are under age 24, 43% serve predominantly rural communities, and 64% predominantly serve patients who identify as Black/African American or Hispanic/Latino.

In this way, Vot-ER hopes to reach even more of the voters who are least likely to be heard by democratic systems - young voters, low income voters, and voters of color. Vot-ER's partnership with TurboVote shows how the combination of unique messengers with high-quality nonpartisan voter engagement tools can help to heal our democracy, one patient’s vote at a time.

Cutting-edge tech that powers our democracy.

notifications sent to voters in 2022 ... and counting